skip to main | skip to sidebar

Over the weekend, all four kittens of my last litter were adopted, and Churchill has been adopted as well!
Posted by Jac at 9:44 PM No comments:

This litter was supposed to go back to the shelter last week, but an illness has kept them from putting on weight as fast as we had expected. They will probably go back this Thursday.

Meanwhile, we got some new toys for the kitties. There's four toys that attach to a kitty wand. This morning, I attached a clump of feathers with a bell and dangled it for the kitties. They all swarmed me and followed the toy, until Fukushima caught it. She latched onto the toy, tail poofed up, and started growling and trying to take the toy away from me. I was cooking, so I let her have it. Now she's still hogging the toy, playing by herself and growling at the other kittens whenever they come too close.
Update: now Jasmin is growling over a single feather that came off of the toy. My kittens don't share or play nice.
Update: Jasmin has taken the whole toy away from Fukushima, and J growls at F whenever F comes too close.
Update: Now they've all had their turns at growling over the toy. And my kittens don't play nice.
Posted by Jac at 9:50 AM No comments:

Hey, I got some new kittens on Friday. They were "found in a garage" and brought to the shelter pretty young. They spent their first weeks with another volunteer, but she had to give them up because she was moving last weekend. They need a few more weeks to put on the bulk before they're spayed (all girls). My hubby K got pics of the girls the other day. 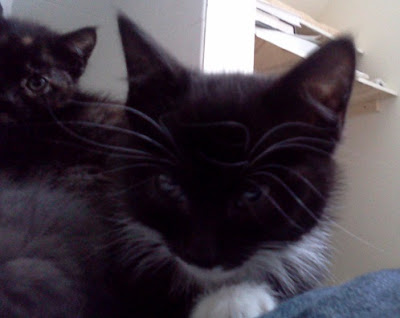 Jasmin Revolution is a bit more reserved, but she still likes to play with her sisters, and she climbs onto my lap to get her cuddles. 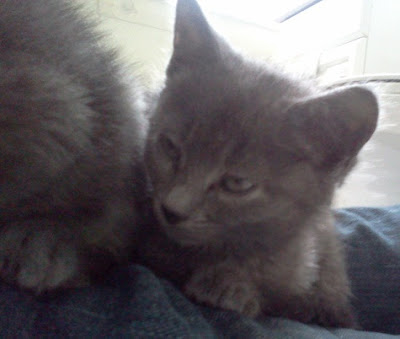 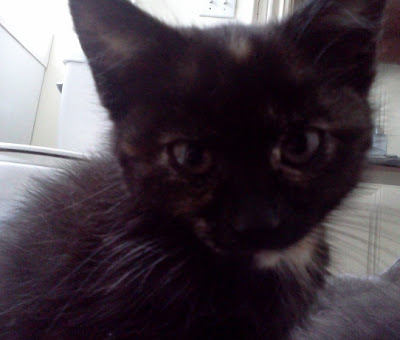 Rapture likes to perch on my knee. She's the most independent. 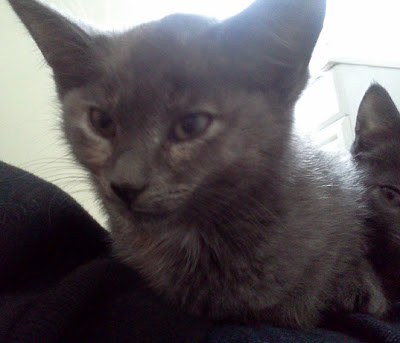 Churchill will be available for adoption at the ARL starting tomorrow. He's spent most of his last full day with me on the futon, finally sleeping comfortably in the open! 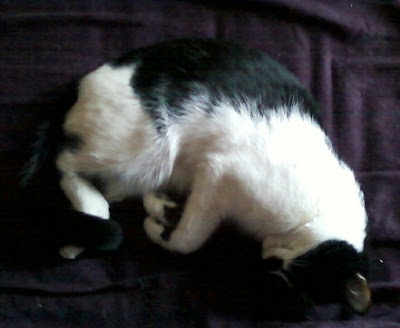 And here he is chillin' with his catnip mouse. 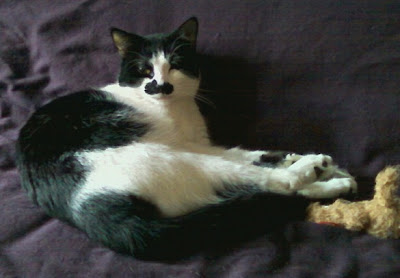 Churchill's favorite spot, outside of the closet, is our futon. Even while he was in hiding, we'd find his hair all over it in the morning. Now he spends much of his time lounging under it and playing all over it. (His future family might want to invest in a cat tree.) My current camera can't do action shots, so all I have are lounging shots. 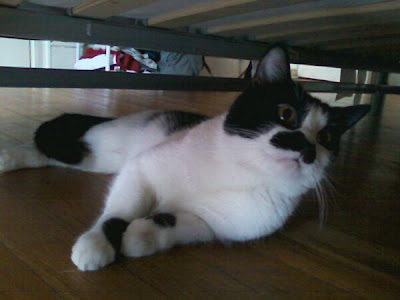 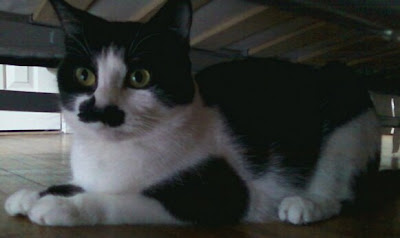 Most shy cats start to come around within their first three weeks of foster. At the end of Churchill's fourth week, he was still hiding, still hissing. We began to fear that he would never acclimate to people, and we started to look into barn placement.

I had started feeding Churchill in his closet. I gave him a quarter can of wet food in the afternoons, and then his regular helping of dry in the evenings. I'd also been feeding him kitty treats out of my hand. At the end of his fourth week, Churchill started yowling whenever I'd come take the old food dish away because he knew he was getting fed. Then on Friday, he started yowling for no apparent reason at all.

I came over and gave him a treat, and he started rubbing his head on my hand. Later, he actually came out of his closet to receive the pettings, but it wasn't all whiskers and purrs. Several times, he tried to grab my knuckle in his teeth, and I said, "Hey!" and withdrew my hand, and that made him hiss and run away. Eventually, I realized he was trying grab my hand and run off with it - you know, 'cuz my hand is magic and made out of treats. His attempts to do so broke the skin once or twice, but he's mostly done with that now.

Churchill has continued to make progress. He plays, grooms himself, eats and uses the litterbox whether or not we're around, only retreating to the closet to sleep. He's started to let my husband pet him now, too. He's also put on weight and cleaned himself up quite a bit since his arrival.

Churchill will be going back to the shelter, available for adoption, later this week. Whoever takes him will need to work through some of these steps again. I don't know if they will be starting all over, or if he'll just be skittish and shy, but at least now we know that he will eventually come around. He is very affectionate when he wants to be, but you have to let him come to you. I haven't picked him up or held him in my lap yet. He may get to that point, or he may not. He loves to play, but he still scares easily, so you can't play too aggressively with him yet. He's very vocal, by the way. You'll know when he wants something, even if you don't know exactly what it is that he wants. He does get bored and seek attention, so if he can be placed with another cat, that might be best. A home with a fenced in yard where he can watch birds and hunt bugs might help stimulate him as well.

I'll be tossing some pictures up here, but Churchill hasn't been too photogenic yet. Hopefully I'll be able to snap some tomorrow during the daytime.
Posted by Jac at 10:46 PM No comments:

Return of the Kitties

Hey, I'm fostering kitties again. I'm finally in an apartment that allows cats, so I've started fostering for the Animal Rescue League of Boston. It turns out that "Animal Rescue League" is an extremely common name for animal shelters; the ARLs in Boston and Pittsburgh are completely separate organizations. I was very impressed with what I learned at the orientation. The ARLB is actively researching to find the best methods for correcting behavioral challenges in their dogs. The shelter takes care of most of the sick animals in-house, so most of my litters will only need routine medical treatment like de-worming. I encourage my readers to check them out, especially if they live in the Boston area.

I am currently providing care for a "shy" cat called Churchill. "Shy" cats are cats that have not responded well to human contact at the shelter environment. This could be caused by a number of things, from the cat being semi-feral, to an abused animal, to the cat not coping well with suddenly finding itself being in a strange place surrounded by lots of strange animals, sounds and smells. Often, it only takes a few days inside a quiet, low key environment for the cat to return to its natural self, and so these cats are observed in a foster home so that the shelter staff will know how the cat will behave in the home and can help to place the cat with a compatible family.

I've had Churchill for two and a half weeks, and progress has been very slow. The good news is that he eats, drinks, and uses his litter box regularly.

That is the extent of the good news. Churchill hides in the coat closet all day, only coming out when we're both gone or gone to bed. In order to try to build an association in his mind between humans and food (happiness!), I've stopped putting food out for him, instead opting to serve him in his closet. He greets me with a hiss, but usually sniffs my fingers, and he's never lashed out. He prefers me to set the food and slowly back away with my hands in plain view, but he will sometimes eat in my presence. I would be more worried about his sedentary lifestyle if he weren't so thin when we got him. I wiped him down a bit with pet wipes, and I didn't like how easy it was to feel his vertebrae poking up under his fur.

Because he's never so much as swatted a paw at us, I speculate that Churchill was not feral. The semi-feral barn cats I've seen have been far more aggressive when faced with human contact and confined spaces. I'm wondering if he was abused, or if his extreme shyness is simply from being under-socialized. Perhaps he had a little human contact early on in his life, but has been alone on the streets (he was surrendered as a stray) ever since. Churchill is only a year old, so I have a lot of hope for him learning to tolerate and eventually enjoy human company. It's good that he came in during the winter, before the onset of kitten season. I'm content to take care of him for as long as it takes for him to adjust to domestic life - he's extremely easy to care for - and it's good to know that there aren't a lot of other animals right now waiting for his spot in foster care.
Posted by Jac at 1:21 PM No comments:

I live in the Boston area and volunteer for the ARL of Boston. Some of my non-kitty interests include international cuisine, writing, math, philosophy and biology.